The acceptable lengths are 13cm and above

TK beans are widely used in gourmet and confectionary industries and are brownish in colour with Fat and Flexible aspects.

Red Beans with Sweet Smell and Floral Fragrance with powerful cocoa note is widely used and accepted in European market and used for extraction or oleoresin for food industries.

Red Beans with Sweet Smell and Floral Fragrance with powerful cocoa note is widely used and accepted in North American market and used for extraction or oleoresin for food industries.

Vanilla CUTS comes from Short beans less then 10cm and fold up during sun drying. These cuts are packed in bulk for shipment.
It has sweet smell with floral fragrance and is widely used for extraction or oleoresin for food industries like Soft Drinks, Ice creams, biscuits and dairy products.

We do not offer Vacuum packing in any of our Vanilla exports.
In order to conserve Vanilla for the optimum time period, please store the beans under the shelter of the sun with temperature between 18°C TO 22°C

Besides Sri Lanka, Madagascar is one of only a few countries where Ceylon cinnamon or so-called True cinnamon grows in abundance. Madagascar cinnamons have a mild, subtle, citrusy and zesty taste, which is ideal to enhance deserts, for example in vanilla cinnamon rolls, muffins, sweet crepes, apple pie....

Cinnamon is used in a variety of traditional medicines and has several health benefits, as well as negative side effects if taken in large doses. However, Madagascar cinnamon contains very low amounts of coumarin in comparison to Cassia cinnamon. Coumarin is a slightly toxic substance, which should be avoided if taking cinnamon regularly as a health supplement. Madagascar cinnamon contains at least 250 times less coumarin than its Cassia cinnamon counterpart which grows in Asia.

In addition to various health benefits, cinnamon is known to control blood sugar levels which can help prevent diabetes. The spice is reportedly even effective against Alzheimer.

In Spanish, Criollo means 'of local origin'. This is a very high quality cocoa bean and is very aromatic and lacks bitterness. The Criollo is used in luxury chocolate but rarely alone since it is very scarce and expensive. Becoming less and less available. It is grown in South American continent and Madagascar and it represents less than 3% of the world's cocoa production. We are very lucky to have hard working farmers and experts to grow and expand this cocoa type.

We produce and offer class 1 to class 3 Baie Rose as per the customer requirements.

Madagascar cloves are graded into three classifications depending on harvest, processing and intended use:

While CG1 is ideal for gourmet use, CG2 is still good for culinary use. CG3 is typically exported to Indonesia for use in clove cigarettes. 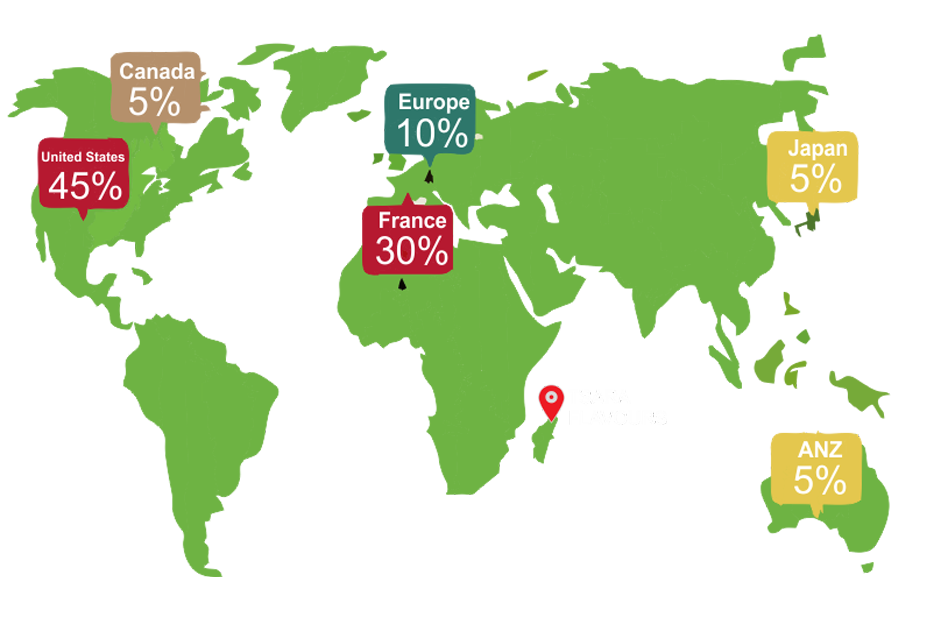